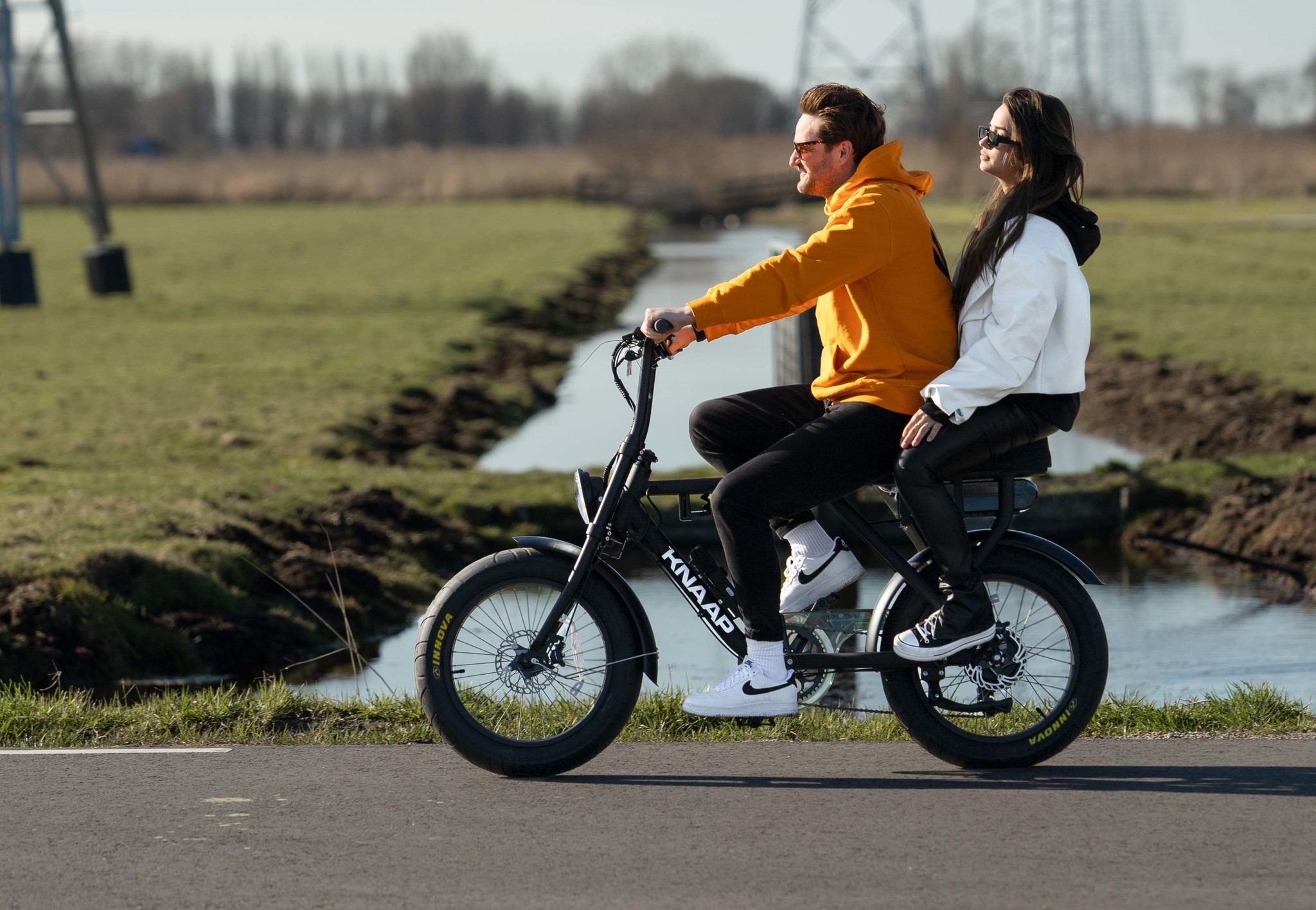 Are you considering buying a Knaap bike? Knaap is the hottest e-bike for young urban citizens who easily want to move from A to B. The Knaap bike makes you look stylish on the road while helping the environment.

In other words, this electric fatbike should be yours.

Need a little more conviction? We got you covered. Here are 7 reasons why you’d wish you bought a Knaap bike yesterday.

1: With the Knaap bike you’re an environmental hero

“You don’t have to wear a cape to save the planet” is what Knaap says. And they follow up on that promise.

Thanks to the 36 Volt 21 Amp Samsung battery and silent 250W Bafang motor in the back wheel you ride the environment-friendly e-bike without leaving any carbon footprint.

And this while cruising through the city streets with no less than 25 km an hour.

2: Style and comfort in one

A few years ago electric bikes were only for the older generations. This changed massively since the arrival of the Knaap bike.

Thanks to a perfect mix of electric scooter features and elements from the traditional electric bike, the Knaap lets you travel around in style. Without compromising on comfort. As all electric Knaap bikes come with:

Yes. We guess it’s the most luxurious and stylish e-bike you’ve ever been on.

Excited to learn more about the different models? Discover the revolutionary Knaap Bike AMS and the latest Knaap Bike RTD in our webshop or on site. The AMS is available in Space Grey edition (grey) and Black edition (black). The RTD is only available in black.

3: Go on an adventure together

Solo cruising through the city streets is good fun. But riding around together is much more exciting.

The Knaap bike is the first 2 seater e-bike ever. Including folding footrests for your by-passenger. This makes it possible to take beautiful rides on the Erasmusbrug in Rotterdam or along the canals in Amsterdam.

Is your plus one a lot younger and are you looking for a Knaap bike with a child seat? Choose the easy way and let Voltes help you mount an extra rear rack with child seat on the back of your Knaap bike.

4: Knaap has enough space to hold your morning coffee

Good news for coffee lovers, especially the I-need-my-morning-latte-ones. In the aluminum frame you find a built-in cup holder. So next time you’re on your way to the office, you go & get your favorite cappuccino at that cute coffee place - without the hustle and potential coffee stains on your coat.

5: The Knaap bike brings you everywhere in no time

Pedaling for half an hour or more with headwinds. No thank you. Luckily this issue belongs to the past when you ride your Knaap e-bike.

Thanks to the fat tires of 20 cm thick you pass the tram rails without effort. In combination with a strong motor and powerful battery, riding from one part of town to the other is just a matter of minutes. Or go even further. As one battery enables you to ride for a maximum distance of no less than 140 km.

A massive difference with the e-bikes from Phatfour (55km) and the ZX from American brand Super73 (70 km).

Knaap is Dutch as cheese. Founded in 2019 by creative entrepreneurs Robin Cats and Michael Fiering.

The founders have a clear mission and international ambition: to forever change the street image of classical bikes in Amsterdam, and far beyond. Are you joining?

7: Knaap bikes are HOT amongst influencers & top athletes (and the rest of us)

We can pretend we don’t care. But secretly we all know the growing popularity amongst famous figures does a lot to Knaap’s image. Convinced already?

Book a test ride on the Knaap bike

Feel free to contact one of our specialists and try out the Knaap bike for free. This way you can easily figure out which Knaap edition fits you best. But we warn you. After a test ride on the Knaap bike you become head over heels in love.

Prefer to check the models online? Discover the Knaap Space Grey edition and the Knaap Black edition of the AMS and RTD now in our webshop.

What is the maximum speed of the Knaap bike?

With the Knaap bike AMS and RTD you reach speeds up to 25 km/hour.

Is it possible to place a child seat on the Knaap bike?

Yes, sure you can! To place the special seat for children on the Knaap fatbike you need a rear rack. Let Voltes help you install the child seat or do it easily yourself.

Can I take the battery from the Knaap bike?

Yes. Take the battery with you inside to charge it there. By taking it out of the bike you’re sure it doesn’t get stolen - as it is the most valuable part of the e-bike.

Am I allowed to ride the Knaap without license or insurance?

You don’t need a drivers license, insurance or other license to legally drive the Knaap e-bike.

What are the technical specifications of the Knaap bike?

Is the Knaap bike available for lease or rent?

It’s not possible to rent or lease the Knaap bike at Voltes. We believe buying your own Knaap bike brings more freedom and joy. An investment that pays itself off in the years of fun you’ll have with it.

7 reasons to buy a Knaap bike

How to maintain your scooter: 5 easy tips

Summerboard SBX: The -skateboard that feels like a snowboard