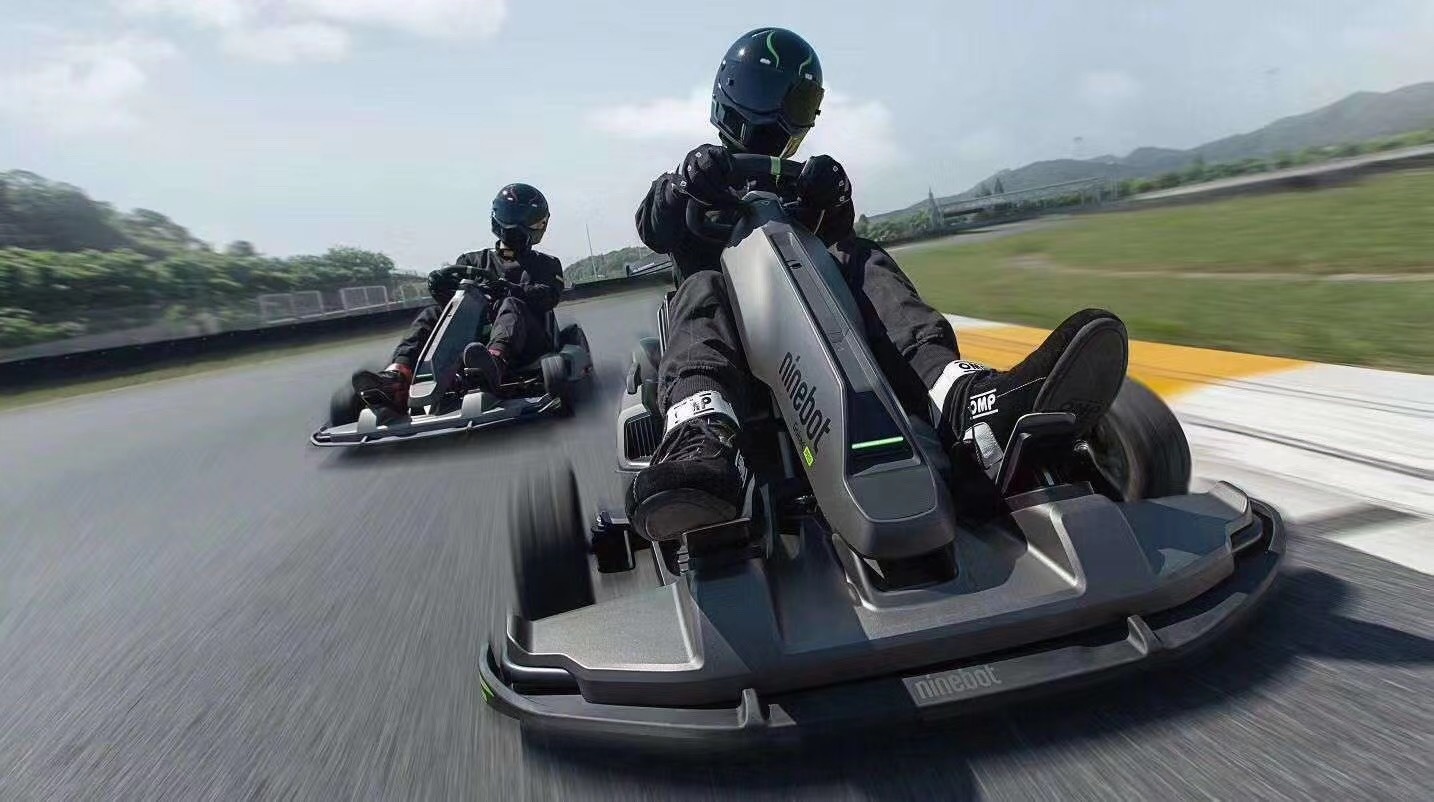 If you’re very much into Formula 1, you’re in for a treat. The well-known electric vehicle brand Segway-Ninebot brings us 3 different Gokarts with each their own signature features: the Ninebot Gokart Kit, the Ninebot Gokart Pro and yes, even an original Lamborghini edition. A Gokart is exactly what it sounds like – a ‘kart’ to dominate the road with, at full speed. We’re about to tell you everything you need to know about these 3 speed demons! 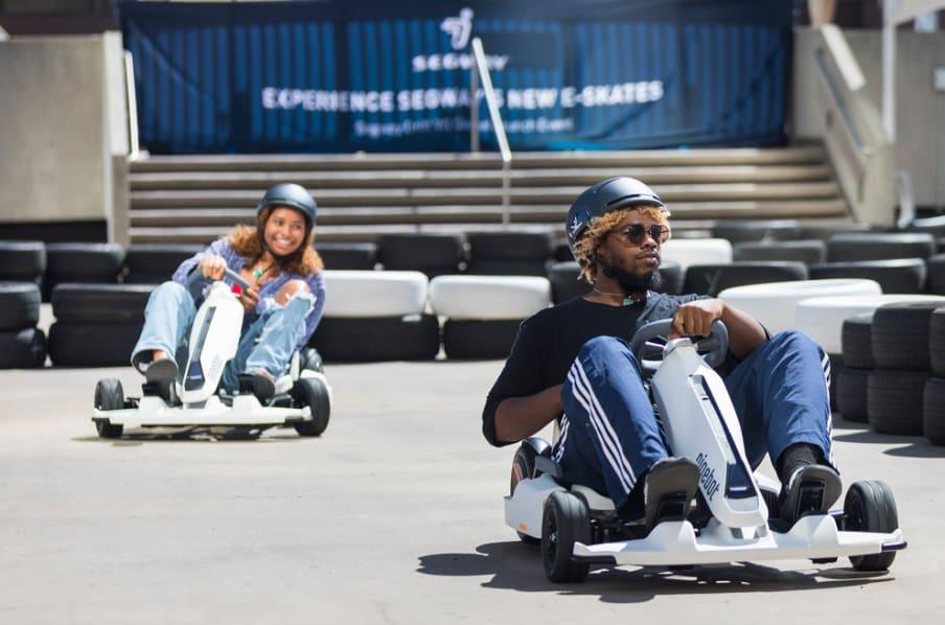 Transform your Ninebot S or Mini Pro into a Gokart

The first ever released Gokart was the Segway-Ninebot Gokart Kit. The name ‘kit’ refers to the way this Ninebot Gokart is built. The Gokart Kit is not a ready-to-go speed machine, but merely a package that consists of different essential elements. To turn the Gokart Kit into an actual Gokart you need a Segway-Ninebot S or a Mini Pro. The Ninebot S and Mini Pro are self-balancing electric scooters with two wheels. They need to be purchased separately, and are available in our webshop. As soon as you have transformed all the necessary parts into a Ninebot Gokart, you’re ready to race. Yess!

Choose between 3 different driver styles. Is it the first time you ever touch an Electric Gokart? Start with 5mph. A bit more confident already? In that case you can start with the standard driving speed, which is approximately 11mph. For those who are ready to go full speed there’s the sporty mode. In this mode you easily reach 15mph.

With 2 engines, each good for a maximum of 800w and 15 mph top speed, you’re going to be blown away by its power. The power of the Gokart’s engine won’t go unnoticed while riding.

Unlike most go karts, the Ninebot Gokart Kit comes equipped with the ability to go in reverse. Once at a complete stop, quickly tap the brake pedal twice and the Gokart is now in reverse. When stopped, tap it twice again to go forward.

A dreamtoy for kids & adults 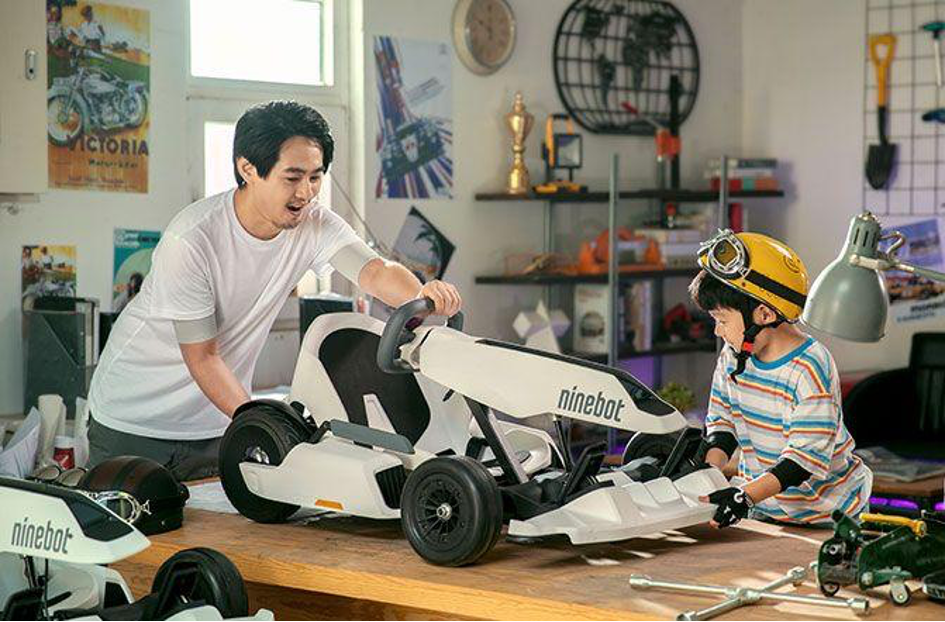 A sense of safety is most important when you’re riding in a kart. And more importantly, when your kids are playing. That’s why safety has been playing a key role in the development of the Ninebot Gokart Kit. The outer part of the Gokart is covered in a plastic layer designed to absorb energy during a collision to effectively reduce the impact force. The inner layer utilizes a steel main beam to provide high-strength protection for, and prevent deformation of, the scooter body.

The double braking system ensures more safety in case of an emergency of electronic brake malfunction. 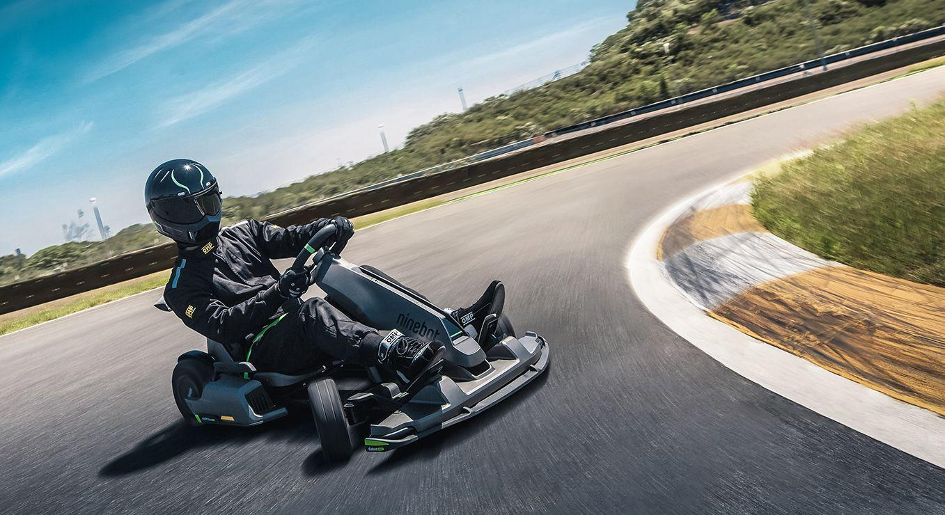 What else to get inspiration from than actual top race cars themselves? The design of the Ninebot Gokart PRO is inspired by Formula 1. The result is a stunning electric cart that will let passengers walking by behind in awe. The Segway-Ninebot Gokart PRO even won 4 major global design awards. Do we need to say more?

Next to the 3 riding styles you get at the Gokart Kit, the Gokart PRO introduces a 4th one that honors its name: the Race mode. The maximum speed is 23mph. We would advise you to only take it to this top speed limit once you already feel comfortable enough cruising at lower speeds. 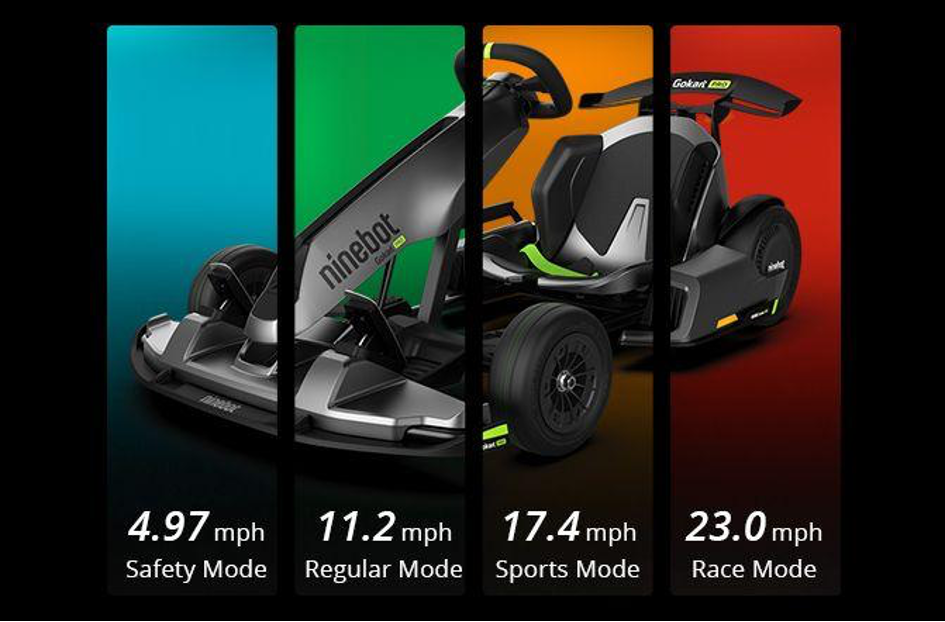 If the top speed of the Gokart Pro doesn’t already excite you to the bones, its drifting feature will certainly do. The electric Ninebot PRO kart is equipped with all the (technical) elements needed for drifting on the road like a pro. Goosebumps all over.

The developers of the Ninebot Gokart PRO wanted to deliver more than just a race kart. They wanted us to feel like we’re part of a Formula 1 race. The whole experience, all senses involved. That’s why the Ninebot Gokart PRO comes with built-in Bluetooth speakers for various race sounds. Use the app to choose your favorite. It’s also possible to use the speakers for playing music while you ride. To be fair, this feature truly does it for us, and makes the Ninebot pro kart the ultimate electric race vehicle.

A unique chance to ride a true Lamborghini

Chinese company Xiaomi and the world-famous Lamborghini decided to collaborate on designing a unique Gokart: the Ninebot Gokart Pro Lamborghini edition. The Lamborghini kart is characterized by its iconic “Giallo Orion” color. 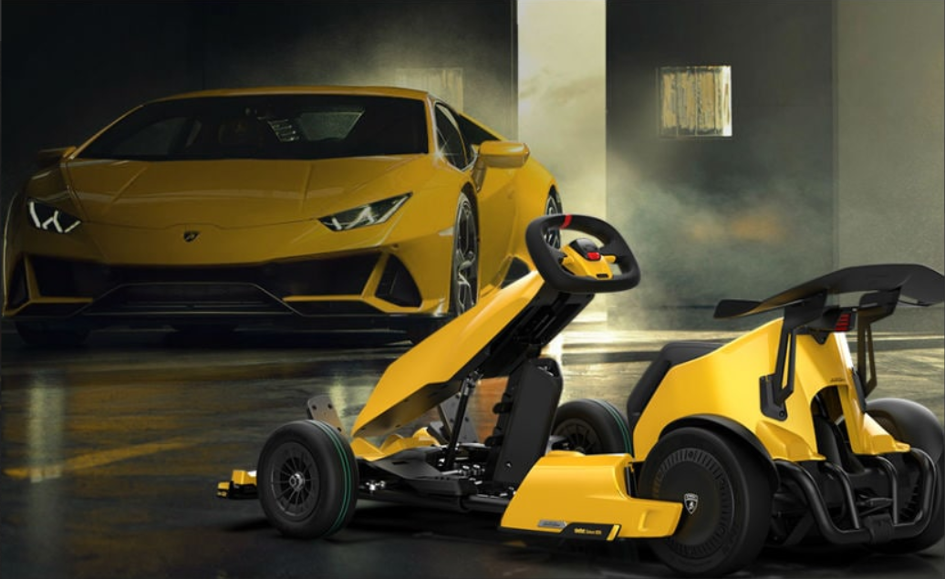 Fastest Ninebot Gokart of the series

With a top speed of 25mph, the Ninebort Gokart PRO Lamborghini edition is the fastest of the group. It takes you on the road up to 9mph in one battery. Even drifting reaches new heights: the special tires make sure your drifting and overall ride experience make you want to cheer from excitement.

The Lambo Gokart wouldn’t be a Lamborghini if the famous logo wouldn’t be noticeable. The logo is covered on different sides of the kart, in different shapes and sizes. Every Ninebot x Lamborghini comes with a special metal plate with its own chassis number. Not bad, right? All in all, the look and feel of this kart is phenomenal. 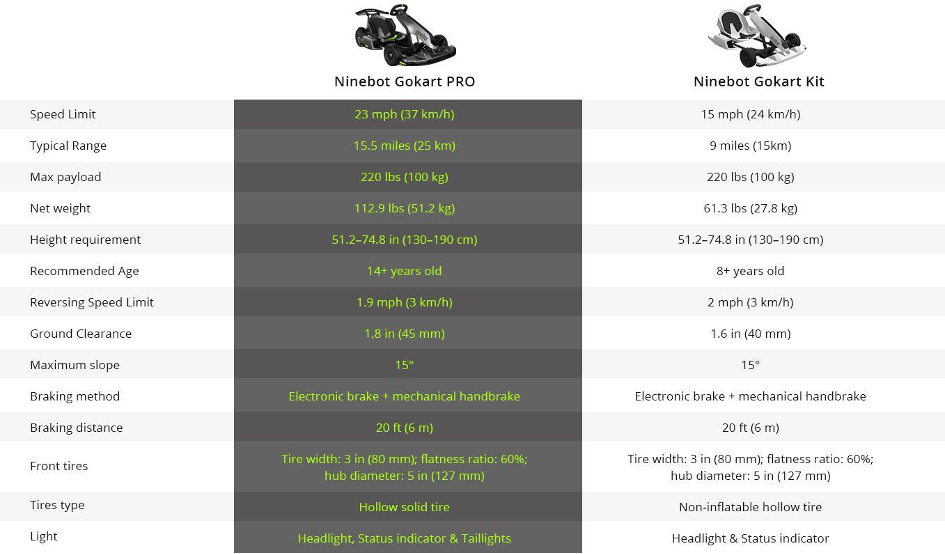 It’s undeniable. Segway-Ninebot’s Gokarts are one of our favorite products of all time, as we’re not just talking about an average cart. The Ninebot Gokart gives us more. Incredible sounds, a Formula 1 look, top speed, safety, drifting. All electric, and for everyone to enjoy.

Are you as excited as we are, and want to learn more about these amazing electric four-wheelers? You’re welcome to take a look at the Ninebot Gokart Kit and the Ninebot Gokart PRO in our webshop. We have all the parts you need to successfully build and drive your Gokart!

Summerboard SBX: The -skateboard that feels like a snowboard

Everything you need to know about the Segway-Ninebot Gokart